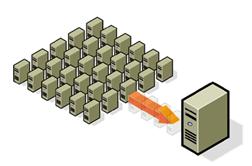 One thing is certain; there are plenty of managed IT services providers (MSP) out there that can help you get started should you choose virtualization for your small business. Since most MSPs are small businesses, their teams have a unique understanding of what small-business owners need to run their businesses efficiently.

Server virtualization provides a small business with almost unlimited storage space. One server can be “divided” to accommodate multiple tenants each in its own virtual compartment. Since small businesses rarely require the amount of storage space that large enterprises do, server virtualization could go a long way toward helping a small-business owner get the most of the servers he already has on site.

Let’s look at some of the ways that server virtualization could benefit your small business.

Virtualization does not magically free you from the usual administrative overheads required for managing physical servers. This is an especially pertinent fact to remember or you risk making mistakes your IT department (or VAR) may have difficulty untangling. Indeed, virtualization management is even more challenging given the propensity towards “VM sprawl” due to the ease with which virtual machines can be created. This is also exacerbated by the intrinsic challenge of monitoring inter-VM network traffic and identification of performance bottlenecks.

One way to avoid having this happen is by enlisting the aid of a managed IT services provider. This transfers the responsibility of monitoring and managing your virtual servers on the shoulders of well trained, experienced IT professionals who can act as a support system for your existing IT team.

Economy – Virtualization may not save you a bundle, but it will cut down on your energy consumption, which will lower your monthly bill. Because you’ll need fewer servers, you’ll save a little money there as well. For a small-business owner, these minor savings can mean a lot in the long run, especially if his business is located in an area with high energy costs.

Virtual servers require fewer people to maintain them than physical servers do. A full-time staff IT professional could garner a starting salary of $50,000 or more per year. Add to that the cost of regular training and certification, and a small-business owner could find herself paying as much as $75,000 a year for one person. Now, imagine if you have to hire five or six full-time IT professionals. The more skilled and experienced someone is, the more he will want to be paid.

Disaster Recovery – Fires, theft and natural disasters happen, often without warning. What would happen to your business if all of your important files were stored on in-house servers that got destroyed in a tornado or fire? With virtualization, that becomes less of a worry, especially if you conduct regular checks to ensure that your data are being properly backed up, that the data can indeed be recovered if necessary and that when recovered, the data are usable.

Virtualization cuts down on the risk that an employee or thief could easily walk off with important company files, something that can happen to a small-business owner who backs up his company’s files on external hard drives.

Of course, it’s important to store the physical servers on which you’ve created your virtual machines away from your office location. That way, if disaster strikes, your servers are less likely to be lost along with everything else, and you’ll be able to minimize downtime.

Business Continuity – Unlike disaster recovery, business continuity is about quickly recovering from things like power outages and server crashes. These two common occurrences could cost a small-business owner a lot of money depending on how long she and her employees remained idol waiting for power to be restored or a server to be repaired. Imagine a hotel that couldn’t book reservations or check in visitors because of a crashed server. No matter how understanding they might be, people would still go somewhere else, taking much-needed revenue along with them. With virtualization, this wouldn’t happen.

One useful feature of server virtualization is something called live migration, which reduces downtime to a matter of a few hours or several minutes.

The beauty of live migration is that, in the event of a power outage or server failure, the virtual machine continues running while it is moved from one physical location to another, allowing you and your employees to remain productive and go about your usual business.

Virtual Desktop – This is a growing trend in the business world. Also known as client virtualization, desktop virtualization separates the PC desktop environment from the physical machine with the help of virtual desktop infrastructure (VDI). Now, here again is where managed IT services providers come in handy. They offer a variety of virtualization solutions such as VDIs, which they are skilled at implementing and managing.

With virtual desktop infrastructure, employees can access the company network from their laptops, tablets or smart devices.

Virtualization has worked well for large enterprises. It could work well for small businesses, too. But there are still some who aren’t sure if it’s a good idea. Caution is good. Fear is not. Before dismissing the idea of virtualization out of hand, take some time to learn more about it; do some serious research. If you know other small-business owners who are already using virtualization in their companies, talk to them about the pluses and minuses.

Choosing virtualization for your company is no small matter. Reducing costs and your carbon footprint and increasing efficiency are great. But implementing virtualization is a process, and introducing a virtual server solution into your small business will have to happen slowly over time, otherwise, you could end up causing as many problems as you solve.